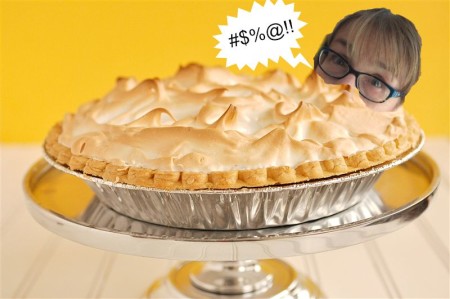 Easy as pie is a big fat lie

For our annual church pie sale, I usually keep it simple and use convenient pie crusts that unfold from a box, loading them up with sweet, stress-free fillings.

But one lovely summer evening after a satisfying day at the office, I announced I was going to make lemon meringue pies from scratch.  Patrick pointed out that this might not be the best night to experiment in the kitchen, but I forged ahead with luscious delusions of grandeur dancing in my head.

I congratulated myself on remaining calm while ‘no fail pie crust’ dough stuck to my rolling-pin. I employed utmost patience while I lined tiny aluminum pie plates with ragged ribbons of mangled pastry.

When I took a flip on the flour-coated floor, a couple of curse words escaped my pristine lips. But I dusted myself off, rationalizing that my slip of the tongue was excusable, since I didn’t take the Lord’s name in vain.

While my pastry masterpieces were browning in a 450-degree oven, I whisked boiling lemon filling, and beat up some egg whites. Patrick couldn’t help but notice I was a little agitated when he helped me wrestle the filled pies into the oven.  Wisdom prevailed, and he refrained from reminding me of his earlier warning about tackling this culinary adventure on a blistering, humid evening, after a long, stressful day at the office.

He had no cutting retort as I glared at him, my lips pressed together restraining these bitter sentiments, “FOR THE LOVE OF GOD, WHY DIDN’T YOU TALK ME OUT OF THIS?” Under my torrid breath, I muttered a stronger profanity, but rationalized it was permissible, since it was unintelligible.

As my physical and emotional temperatures rose, I watched through the smudged oven window as copious chunks of crust crumbled into a lake of fire and brimstone. I had an asthma attack when I opened the oven door, and inhaled billowing black smoke. Wheezing and coughing made it difficult to steady the pies, and molten, lemony lava crested and receded, threatening to overflow the crusts’ jagged edges.

The smoke detector made a piercing announcement that the house might be on fire, and the dog began to bark and run in circles around my legs.  I felt like I was having an out-of-body experience when to my horror, I finally uttered an expletive that shattered a commandment.

Once the pies were on the cooling racks, weeping syrupy meringue tears, I rationalized that I had done what any Christian would do under the circumstances: given a shout out to Jesus for help in a desperate situation.

I’m sure that even the most pie-ous among you will not cast judgment on me for swearing (or writing bad puns) now that you know the full story.  After all, didn’t Jesus say not to look at the speck of pie crust in your neighbor’s eye, when you have a whole lemon meringue pie in yours?

Molly Stevens arrived late to the writing desk but is forever grateful her second act took this direction instead of adult tricycle racing or hoarding cats. She was raised on a potato farm in northern Maine, where she wore a snowsuit over both her Halloween costume and her Easter dress.

The doctor will see you now — by video

The doctor will see you now — by video

Seniors Not Acting Their Age